The Milestones release fourth single and lyric video ”Madness And Delight” from their upcoming fifth album ”Beautiful Light”. ”Yet again a bit different song from us. This is one of the old songs from early 2000’s that we demoed and arranged several times, but for some reason couldn’t make it work. But we knew that we had something very unique and great in our hands. That’s why we always got back to it and tried a different angle. Finally we nailed a version that we all love. It would be perfect for any Quentin Tarantinomovie soundtrack. So, if anyone knows Mr. Tarantino himself please let him know that there’s a song waiting for him”  the band says.

The Milestones release third single and album art video ”Drivin’ Back Home” from their upcoming fifth album ”Beautiful Light”. ”This song was obvious choice as the third single. It shows where our roots are. Song could be from any of our albums. It sums up the essence of The Milestones sound. When you listen to it and close your eyes you can imagine fast car driving through the night, smell the burning rubber, see all the bars and people rocking out on the streets living their rock and roll dreams. When the night is over you can drive back home with a big smile on your face. It’s good old fashioned rock and roll at its best ” the band says.

It’s time to act now; new album pre-sale has started! ”Beautiful Light” will be released on March 1 with two different covers. First press will be 150 copies of each. Pre-order the album from the links below:

The Milestones releases second single and video “The Way To The Great Unknown” from their forthcoming fifth album titled ”Beautiful Light”. ”This song shows a different side of the band. It’s still The Milestones but with a twist. This is also a little hats off to the late great Tom Petty, whose music we all love. Song was written in the late 90’s but this time around we felt that we knew how to do it right” says the band.

The Album ”Beautiful Light” will be released with two different covers; ”We had a bit of a disagreement about the cover so we let the fans decide and vote which cover to use. The result was pretty much a tie so we decided to release both covers. We haven’t done that before so it’s all good, everybody’s happy”

Be quick and buy tickets now in this link: 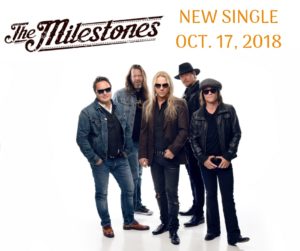 We are heading for studio in June 2017 to record our forthcoming fifth album. The album will be recorded at Eastsound Studios , Helsinki with our very good friend Pekka “Splendid” Laine.

Stay on tune for more news and clips from studio!